People use art in different forms to express their creativity and ideas, but what we often forget is that art can also be used as therapy. Saba Islam is an artist and illustrator who discovered these healing powers of art by accident.

She realized that putting her thoughts and ideas on paper, helped her overcome her anxiety attacks.

“This series was never planned! It started as just an experiment of this style of drawing out of curiosity. I sort of gradually found out that it was helping me as a remedy for my anxiety attacks,” Islam told Bored Panda.

“Then, whenever I was having an attack again, I started to draw. I drew what I feared and what gave me relief. I drew myself helping me!”

Since she’s drawing about real-life problems and her biggest fears, Islam’s illustrations that show loneliness and pain are very relatable. Anyone who ever felt lost in this world can understand the characters she’s drawing and maybe we’ll all be inspired to create something ourselves when we’re feeling down.

Check out Islam’s work in the photos below. Dan Howden Is the Master of Linocut These Crystalized Books Are Pure Magic 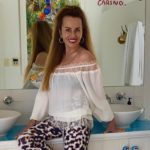