British graffiti artist Pref is quickly making his name in the street art world with unique multi-layered 3D murals that seem to contain common phrases at first. But once you start looking more closely, you can notice that the initial phrase overlaps with a second one that can have a completely opposite meaning. For example, the word “more” turns into word “less” if you just tilt your head a bit. Pref has been experimenting with this style of graffiti art since 2010.

“Since then I have pushed and experimented with this idea of overlapping words, seeing how many I can fit into the space of one word, and then slowly boiling it down and simplifying this idea to become more legible,” – he recently told Colossal. “This in turn lead more to the use of ‘typography’ throughout my style as you see today. I have always been interested in the idea of graffiti speaking to the general public, rather than just other graffiti writers, and readable letters or a more ‘typographic’ approach has been a good route to that.”

You can check out some of his works below.

Less is more, more or less 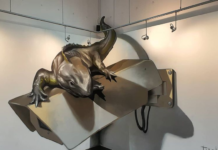