Sometimes, all you need to create a piece of art is a felt-tip pen and a word. That’s all Seb Lester needs, anyway.

Seb is a designer and calligrapher from Lewes in East Sussex, England. He’s also a social media darling and a leader of an online arts community, thanks to his incredible calligraphic skills.

Seb’s craft, calligraphy, is as old as time. Writers and artists have been designing and decorating the texts they were writing ever since writing existed, and we can find examples of calligraphic traditions all over the world – from China and India to the United States. There’s something captivating in intricate, carefully-designed lettering – it’s as if the text is more than just a text, the ink on the paper itself is a type of art.

Unfortunately, like many age-old traditions, calligraphy has been a dying art in the 20th and 21st centuries. Today, most of us communicate via text messages and emails, not hand-written letters, and the interest in such thing is quickly waning. But Seb has brought calligraphy to the 21st century, thanks to social media.

Seb has been documenting and sharing his work on Instagram for years, and the platform has helped him, as well as other calligraphers, find a new audience, in followers who enjoy seeing the writing process itself. In an age when our day-to-day is overwhelmed with stimulations, Seb’s slow, deliberate process is oddly soothing.

Today, Seb has 1 million followers on Instagram, and he can keep doing what he loves – turning letters into art. Guy Travels to Match Movie Scenes With Their Locations This Artist Turns the World Around Her Into a Rainbow Milana N - January 17, 2020
0
Get ready to meet the most adorable dog duo on Instagram – two cute Yorkshire Terriers named Taco and Minne who already have more... Ron K - January 17, 2020
0
A girl named Rayna is behind the brand Hermit Girl Creations through which she shares fun embroidery designs of cartoon characters and... 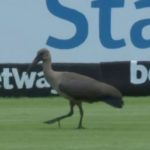