You may want to skip the photos below if you’re feeling because Dennis Prescott’s photography will make you want to eat it all right away. Approaching half a million followers on Instagram, this talented food photographer is becoming somewhat of an authority in the foodie community.

Prescott was a musician for 10 years and basically lived in a 15-passenger van, traveling around the world. “I moved to Nashville in 2008 and while I was there I became obsessed with food,” he shares.

“I became obsessed with cooking but more specifically feeding people. That specific aspect of orchestrating in dining, in the sense that you’re spending another hour at the table, I really wanted to invest in that as someone who lived on the road,” he explained

Photography followed him no matter what he was doing, so it was only natural to merge it with cooking at some point. The result: these amazing photos below and a cookbook titled Eat Delicious. Enjoy! 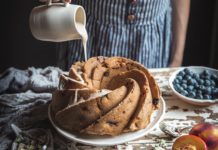