22-year-old Nigeria-born, London-raised, and New York-based designer, Teni Adeola, AKA Tia, has a lot to live up to. “She’s ready to be one of the greatest female couture designers in the world,” Teen Vogue wrote about the young designer. And indeed, with celebrities like Gigi Hadid, Kali Uchis, and Dua Lipa sporting her clothes, it’s clear that Tia is here to make a statement.

Her fashion brand, Slashed by Tia, was created from her dorm room during the summer of 2017, using her art history background and passion for the Renaissance period as inspiration.

Talking with NBGA about her artistic background, she recalled that while growing up in Nigeria she used to make clothes for her dolls from traditional fabrics her mother had.

“Also, when I was 13 I interned with a Nigerian designer named Ituen Basi who is pretty cool, she has dressed Michelle Obama and a few other women,” she added. “And yeah, it’s something I’ve always been interested in and kind of done. It’s not something I woke up one day and was like ‘I’m going to make clothes now.’ But I’ve always been really into clothes.”

And going forward, she admits that what motivates her most is getting her parents’ approval. “Honestly, what inspires me is just impressing my parents, you know, my parents are African, so they’re not really into the whole fashion thing,” she said. “But obviously, they’ve definitely seen growth and it’s exciting when I can tell them things that have happened that they actually know about, or like working with platforms they’re familiar with, that’s always really exciting and it pushes me to do even better.”

Check out some of her unapologetic designs in the gallery below. 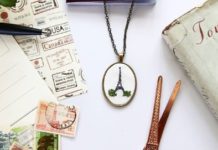