Parking near a fire hydrant is ill-advised, and the reasons are not farfetched. The Anaheim Fire and Rescue team decided to show social media users why they shouldn’t park close to a fire hydrant.

In a tweet, the department said that park near a fire hydrant would have to deal with broken windows as well as towing fees and a citation. A picture of a car with the hose passed through the car windows was attached to the tweet.

The incident happened when firefighters arrived to put out a residential fire. On arrival, they couldn’t access the fire hydrant because a car parked in front of the hydrant. The police broke the windows and ran the hose through the car.

The tweet went viral soon, and several users supported the act. They applauded the department for its proactiveness in finding a solution despite the setback.

See the photo below. Check Out These Quirky Comics Created By Bella Sriwantana This 93-Year-Old Grandma & Her Grandson Make a Hilarious Duo “Reader’s Block” and Other Comics by Grant Snider 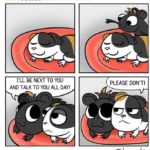