When it comes to cuteness, it’s hard to compete with dachshund dogs. Embodying the essence of “aww”, their miniature stature and playful personalities make them the ideal pet.

Recently we’ve taken to a miniature longhaired dachshund named Winston. And if cuteness is a virtue, Winston is one of its saints. “Winston is the most amazing creature in the world,” gushed his owner, Ana, in an interview with helloBARK!. “He is kind, loving, smart and protective.”

Which naturally makes him a good candidate for Instagram stardom. His online presence was further reinforced after some 100 people attended his first birthday party in Hyde Park—an event that was commemorated in The New York Times (because, why not?).

With more than 14,000 fans on Instagram, Winston also collaborates with brands like Edgard Cooper, Purplebone, and The Rockster. But most of his day consists of naps and pets.

“After he is done with his morning beauty sleep, he has his breakfast and we go for a walk in the park,” says Ana. “The rest of the day is: siesta after the walk, wake, play, have dinner, do commands training with food from the family dinner, play some more, a quick walk around the block and signing off for the day.” 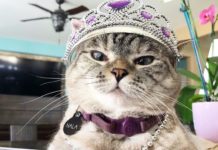