Craft artist Hiné Mizushima knows her way around a needle and thread. Born and raised in Japan, she majored in Japanese traditional painting before working as a designer and Illustrator in Tokyo. After traveling around the world for some years, she moved to Vancouver, Canada where she currently works as a slow crafter, needlefelter, miniature collage artist, and stop-motion animation video artist, amongst other titles.

“My work is a bit retro, twisted, fun, colorful, nerdy, and cute (but in questionable taste),” she relayed in an interview with Frankie. “Luckily I usually make what I want. And I hope my work can make people smile!”

Amongst her more notable creations are her soft sculptures (but don’t call them toys!) featuring realistic and imagined creatures. Those have been exhibited in galleries in the US, Australia, and Japan, and are featured in books and magazines, as well as commissioned for Adobe Creative Cloud event in NYC, and a New York Times web campaign.

“It takes a long time to make a needle-felted piece,” Mizushima admits, “especially for me (I’m a slow crafter). It has also crippled me! (Seriously, I have been having a problem in my shoulder and arm for months!)” Some of her felt creations and prints can be found on her Etsy shop.

Other than her sculptures, Mizushima has also been commissioned for many music videos for the band They Might Be Giants, and has made miniature collages for several book covers in Japan. “When I started to work on my second stop-motion music video for They Might Be Giants in 2007, I needed to make needle-felted characters and props for the first time,” she recalled. “That’s when I found out that I really love to make 3D stuff with wool fibre, so I started making more, and then I opened my Etsy shop. If I hadn’t got the video job, I probably wouldn’t have started needle-felting.”

Take a look at some of her work in the gallery below: 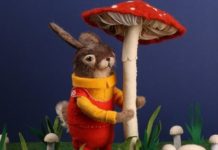