Even though the holiday season has been over for months, we still have room for dessert. Especially when it comes in the form of Tiffany Howard’s cakes.

The mastermind behind the successful food blog Oh Honey Bakes, Howard has gained online stardom thanks to her seasonal recipes of (mostly) gluten-free cakes. Because who said you can’t have your cake and eat it too?

“I transitioned to a gluten-free diet about a year ago, and while I still love over-the-top cakes, I want to create recipes for every day as well as for special occasions,” relayed Howard in an interview with le buzz.

Some of her recent recipes include dark chocolate pound cake with dark chocolate ganache and pumpkin cake with gingersnap toffee, cream cheese buttercream filling, and cinnamon Swiss merengue (is your mouth watering yet?).

Raised in Virginia, at the base of the Blue Ridge Mountains, Howard is currently based outside of Seattle, where she works from her tiny farm.

“I fell in love with baking about ten years ago,” she shared in the interview. “I started baking insane cakes after I had my son, and friends started asking for the recipes.”

According to Howard, it was when the family moved to Seattle (and after some encouragement from a friend), that she started posting her cake recipes, sharing them with a larger audience. “I really had no expectations, it was just something fun for me to do,” she admits.

Her Instagram page will inspire you to start baking. 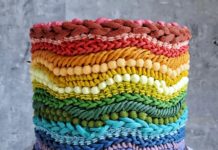