Sarah Harmon is obsessed with her two dogs, Goober and Captain. So much so that she dedicated an entire webcomics to them, titled Comic Musings. According to her, the comic is also the result of boredom.

“Bored with my 9-5 job, I started making comics about my life with my husband, our two dogs, and cat during my free time,” Harmon wrote on Bored Panda. The Florida based artist jokes that her pets are better than a security system.

“This really happened. Someone came to our door selling security systems… but he was terrified of the dogs,” she shared on Instagram where her creations have gained over two thousand followers – animal lovers like her. Harmon also owns an Etsy store where she sells some of her adorable illustrations.

Scroll down and take a look at Comic Musings below. Are you a pet owner? Which drawing describes your life best? 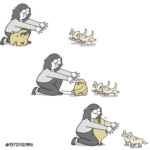 Guy Travels to Match Movie Scenes With Their Locations

Jovana A - January 20, 2020
0
Thomas Duke is a movie enthusiast who travels a lot to find locations of some of his favorite scenes. He takes photos...