Sables are adorable small mammals that can be found in the northern parts of Asia and Russia. Unfortunately, these lovely creatures are raised and killed for their expensive fur on more than 70 farms in Russia.

A sable named Umora would have suffered the same fate if it weren’t for Zhenya – a noble girl who decided to adopt and save one of these animals. Zhenya saw a picture of a wild sable online and after quick research learned that their fur is one of the most valuable in the fashion industry.

“Eventually, I learned that there was an opportunity to buy her out from a fur farm. She would have died there, so I decided to save the little fella,” Zhenya shared with Bored Panda.

Umora is enjoying her life now, but her owner says that taking care of her comes with a lot of challenges. “Umora has a difficult personality. Living in the fur farm really took a toll on her, so she’s quite emotional, sometimes even a bit hysterical. Umora is also cheeky and likes to steal stuff. She’s very active and smart as well.”

Take a look at this lovely creature in the photos below. 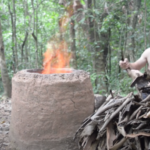